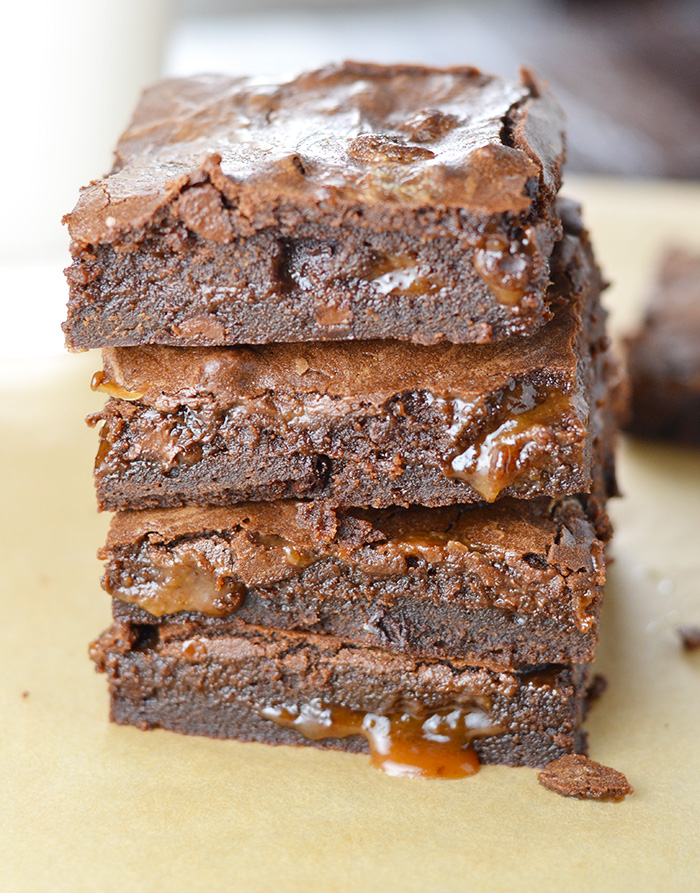 Get ready to cheat on that diet. Since it’s January, I should stick to posting healthy recipes that complement everyone’s new years resolutions. But that quickly becomes boring, doesn’t it? We just had one of the largest blizzards in history in the North East so would you rather stay home and eat vegetables or stay home and eat Double Layer Caramel Brownies? In my opinion, there’s no comparison. Brownies, especially gooey caramel ones, are the perfect comfort food for a snowy evening by the fire or watching Netflix.

If there’s one recipe my grandmother, Paula Peck, is known for, it would be her brownie recipe. It’s an easy classic and one of few chocolate recipes in her book, “The Art of Fine Baking.” A few years ago, Mark Bittman, former columnist of “The New York Times” and self proclaimed Paula Peck fan, referenced her brownie recipe in “Truth is in the Fudginess.” So when I wanted to make an even more decadent version, this base recipe was the natural choice.

These crazy caramel brownies have not just one layer of caramel, but two. This really isn’t necessary and feel free to stick to one layer. The benefit of two layers is the flavor. These brownies have serious caramel flavor and are super sweet, rich, and delicious. You can still get the caramel flavor with one layer – it won’t be as intense, but it will definitely save time. Chewy chocolate with semi-sweet chocolate chunks and layers of sweet and smooth caramel make this brownie, way over the top…in a good way.

I’m sure you’ve been working hard at that diet and exercising regularly so take a break and enjoy some chocolate caramel decadence. Since they are rich, cut these brownies in small squares. You will feel just as satisfied but not as guilty. Either way, these dreamy Double Layer Caramel Brownies, are worth it.